“George C. Wolfe and Joe Mantello go back to the 1990s, when Mantello, as a young actor, starred as Louis in Wolfe’s Broadway production of Tony Kushner’s Angels in America. In the years that followed, Mantello found himself acting less and directing more. Now, they’re formidable colleagues in their prime, as well as great friends, to boot. In the latest edition of TheaterMania‘s Artist to Artist series, Wolfe and Mantello discuss what their successes and failures mean to them, how they approach actors in the rehearsal room, and what it takes to maintain a level of joy that carries them through adversity.” 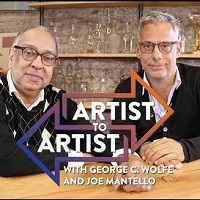