“BSO founder Henry Lee Higginson poured all of his soul and much of his fortune into seeing the orchestra flourish. But his ambition for it to rival the best European orchestras remained out of reach until he lured the German Kaiser’s favorite conductor to Boston” in 1912. Five years on, no less than Teddy Roosevelt declared, “Muck ought not to be allowed at large in this country!” 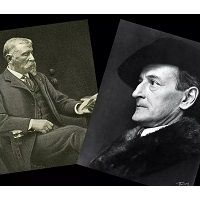