People of a certain age will remember her from Hollywood Squares; those slightly older know her from The Dick van Dyke Show, where she played a TV writer who kept right up with her male colleagues. But she had her own 15-minute national radio show when she was a toddler and did her first national vaudeville tour at 7 – and she’s still doing voice-over work today. Also, as she tells Rachel Symes, she told off a Hollywood sexual harasser back in the 1950s (and suffered some consequences). 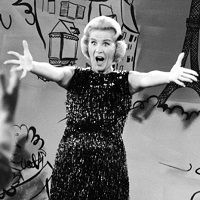