“Mexico has been criticized for failing to register the theft of stolen cultural antiquities and for a lack of coordination among authorities responsible for preserving the items. Many church paintings are replicas of the two- and three-hundred year old paintings that have been stolen. According to official figures last year, 90 percent of stolen cultural objects, including archaeological pieces, liturgical objects and religious art, are never recovered.” 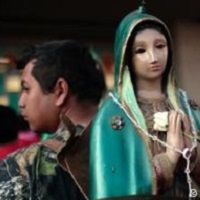