“As bad as they were, the 2011 earthquake and tsunami were just the latest chapter in a long, tragic narrative. The Japanese archipelago sits at the nexus of four tectonic plates, subjecting the region to more than 1,500 seismic events each year, including at least two 5.0 magnitude or higher earthquakes. As a result, Tokyo has been destroyed and rebuilt on average, from 1608 to 1945, once every five years. … The effects of centuries of natural disaster may be most obvious, though, in Japanese culture.” 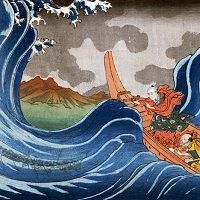