“Brash and witty, Mr. Kaminsky developed his reputation at Warner with best sellers like Never-Say-Diet (1980), by Richard Simmons; Megatrends (1982), by John Naisbitt; sequels to The Happy Hooker, by the former madam Xaviera Hollander; potboiler fiction by Andrew Greeley, a Roman Catholic priest; the paperback edition of Judith Krantz’s Scruples; and novels by Nelson DeMille. But his best-known deal was certainly the one that Warner made with a recently disgraced former president: Barely six weeks after [Richard] Nixon resigned in 1974, Mr. Kaminsky signed him to an estimated $2.5 million deal to write his memoirs.” 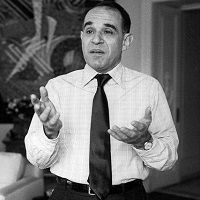