One might think it odd to stage a symphony at Glacier Point. But according to Yosemite spokesman Scott Gediman, “From the signing of the Yosemite Grant to the present day, the arts have played a significant role in the creation and continued interest in preserving these public places.” Yosemite sparkles in Ansel Adams’ photos. It is illuminated by John Muir’s prose. Yosemite has a new artistic champion in Les Marsden, the conductor of the Mariposa orchestra. 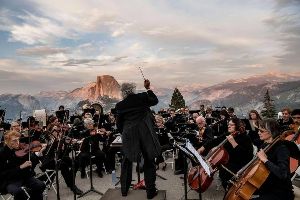