“[The] French-born actor… on Saturday inaugurated a cultural and film centre bearing his name in Saransk, the capital of the Russian region of Mordovia in which Depardieu is a registered resident … [He moved there after] giving up his French passport as a protest against French president François Hollande’s proposal to tax France’s highest earnest earners at over 75 percent.” 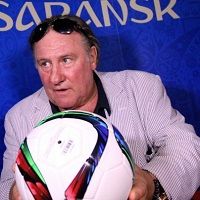