“For many political psychologists, it seems abundantly clear that traits and politics go together. There’s evidence that many aspects of personality develop quite early in life and have a genetic component, but we don’t become actively political until we are older. So it’s sensible to assume that the one might have some bearing on the other. But most of the work on the subject in the past decades has consisted merely of scientists conducting surveys and observing correlations.” 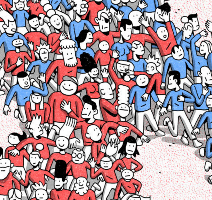